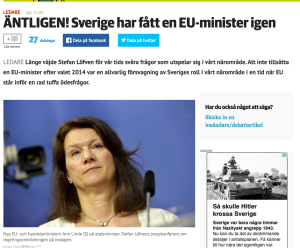 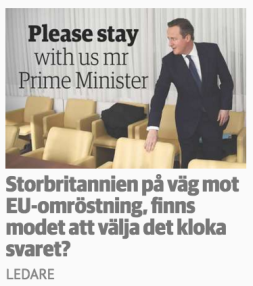 My priority question to the EC on the Compatibilty of Nord Stream 2 with EU #EnergySecurity Priorities >tabled 2day pic.twitter.com/fHmBhotW3N

I am writing to let you know where we stand on the issue of a UK in/out referendum before we address it at the December European Council.

In November Prime Minister Cameron set out the four areas where he is seeking reforms to address the concerns of the British people over UK membership of the European Union. On this basis, we, in close cooperation with the Commission, held extensive bilateral consultations at Sherpa level with all Member States. We also discussed it with representatives of the European Parliament.

Clearly this is a significant and far-reaching agenda. Consultations have shown that the issues raised by the British Prime Minister are difficult. At the same time there is a strong will on the part of all sides to find solutions that respond to the British request while benefiting the European Union as a whole.

We have been looking at the four baskets mentioned by PM Cameron. Let me briefly set out my assessment of where we are in this respect.

All in all it is my assessment that so far we have made good progress. We need some more time to sort out the precise drafting on all of these issues, including the exact legal form the final deal will take. We also have to overcome the substantial political differences that we still have on the issue of social benefits and free movement. The December European Council should address all the political dilemmas related to this process. Based on a substantive political discussion we should be able to prepare a concrete proposal to be finally adopted in February.

Let me finally share with you some political remarks. All involved must take their part of responsibility. I will act as an honest broker but all Member States and the institutions must show readiness for compromise for this process to succeed. Our goal is to find solutions that will meet the expectations of the British Prime Minister, while cementing the foundations on which the EU is based. Uncertainty about the future of the UK in the European Union is a destabilizing factor. That is why we must find a way to answer the British concerns as quickly as possible.

In times when geopolitics is back in Europe, we need to be united and strong. This is in our common interest and in the interest of each and every EU Member State. The UK has played a constructive and important role in the development of the European Union and I am sure that it will continue to do so in the future.